Bombardier’s Challenger 300 Midsize Trans-Continental Business Jet (originally known as the Continental Business Jet) was launched in 1999 and left Mother Earth for the first time in August 2001 from Wichita, Kansas. She received certification from Transport Canada, the US FAA and the European JAA in 2003 and entered service in January 2004. Due to its great performance and relatively low operating cost, the Challenger 300 does the job of many larger business jets more economically and offers just as much comfort. It has a range of up to 3,100NM and in many mission instances larger aircraft with greater range would also require a technical stop. For example, on a trip from Cape Town to London (5,400NM), few aircraft would not require a technical stop and therefore there would be little advantage gained by operating a more costly machine. Bearing testimony to the Challenger’s attributes is the fact that the 200th aircraft was delivered in July 2008.

The Challenger 300 has a conventional all-metal airframe, and winglets reduce lift-induced drag. It is a fine example of industrial cooperation, with Canadair responsible for building the forward section of the fuselage, including the cockpit and primary flight controls, and Mitsubishi Heavy Industries building the wings.

Bombardier Aerospace in Belfast is responsible for construction of the centre fuselage, the rear fuselage and tail are built by AIDC of Taiwan, while Hawker De Havilland Australia supplies the tail cone and the auxiliary power installation unit. The component sections are transported to the Bombardier Aerospace Montreal Dorval facility for final assembly.

Every facet of construction was achieved with input from all kinds of affected parties, from passengers and crew to engineers and operations personnel. The final product is suited to all of these parties with little compromise.

The business class cabin provides a working environment to corporate executive standards. The passenger cabin has an area of 13.28m2 and seats eight business passengers in double club seating. The cabin is fitted with tracked swivelling recliner seats each with a table, a power point and telephone point. 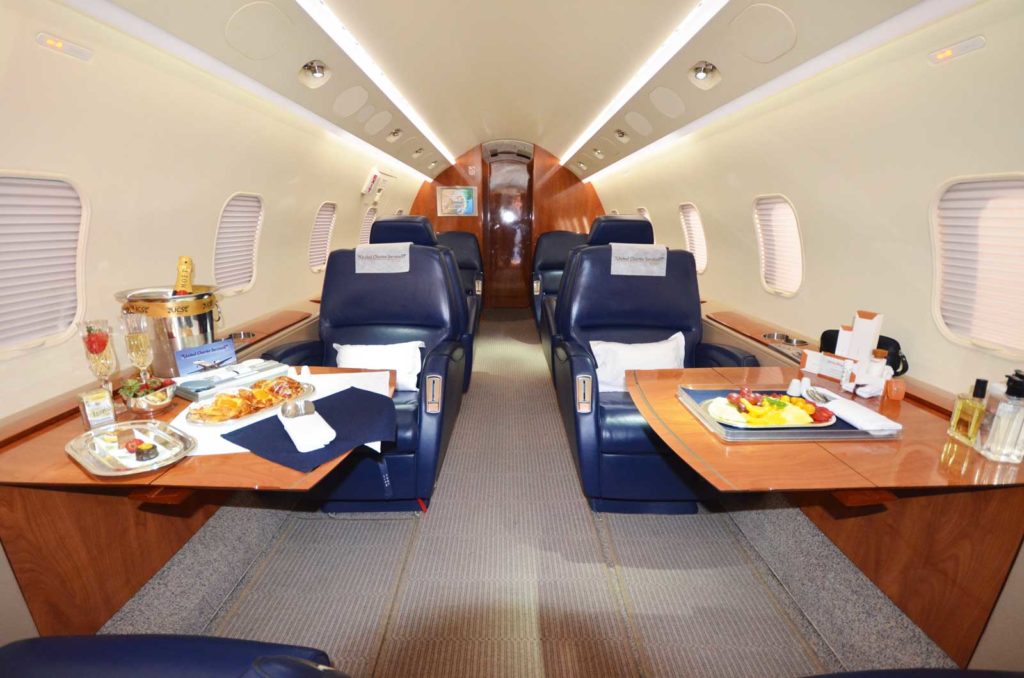 The aircraft has a Honeywell 36-150BB auxiliary power unit for ground and alternate in-flight electrical power and pneumatic air supply for air conditioning and pressurisation. The DC electrical system operating at 28 volts includes three brushless generators. Two nickel cadmium batteries are used for ground power, for auxiliary power-unit starting, and for emergency power in flight. An engine bleed air-supplied anti-icing system is used for the leading edges of the wings and for the lips of the engines’ nacelles. Electrical de-icing is used for the windscreen and the pitot probes.

The two integral wing tanks hold 14,150lbs (6,124kg) of fuel. The aircraft is equipped with an Intertechnique fuel system. Gravity fuelling points are located on the top of each wing. There is a single point pressure refuelling (SPPR) and defuelling port. The SPPR system allows for automatic pre-selected quantity refuelling.

The best crew training to operate this level of aircraft is imperative, and both Bombardier and FlightSafety offer Pilot Initial and Recurrent Training at a number of facilities. The training in a simulator environment is unparalleled in terms of thoroughness, intensity and the understanding of systems and potential operational scenarios that cannot be easily or cost-effectively demonstrated in the real machine (see SA Flyer FlightSafety report, 2008).

As with all flights we begin with a notification that a flight is ‘in the system’. From this we get route and payload information and carry these details forward to our flight planning system. Performance calculations are made with reference to fuel, alternates, runway conditions, prevailing weather etc. Our cabin attendant is notified of the number of passengers, their dietary requirements and the number and duration of sectors to be flown. From this, he or she will plan and order the catering accordingly.

The Challenger 300 has a wonderfully simple fuel system that comprises of a pressure re-fuelling point and an electronic panel that allows you to plug on the hose, select the amount of fuel required, and away you go. No mess and little fuss. The external pre-flight consists of a general walk-around ensuring that gear pins, engine and pitot covers etc have been removed and that there are no other anomalies. The cockpit pre-flight is a systems check and an update of the Honeywell FMS (flight management system) with the route, payload and ambient conditions information. The FMS and performance computer then calculates the aircraft weight, runway distance required and the V speeds. Should any parameter exceed a limitation the computer advises you. Usually if this occurs it is due to finger trouble as we plan our departure and arrival performances when we receive the mission profile.

The two HTF7000 engines on the Challenger are air-started and require that either the APU is started first in order to supply bleed air or that an external source is provided (huffer cart). It is possible to start one engine from a huffer cart and to cross-bleed start the opposite engine. Once both engines are running we perform tests of systems such as anti-icing system and flight controls. Setup complete, and with steering engaged, we are ready to taxi.

‘Cleared for takeoff’ is the expression that allows us to advance the throttles through the climb thrust detent into the takeoff detent. The FADEC system that controls the Honeywell HTF7000s calibrates all of the fuel control systems to give the full 6,826lbs of thrust that each engine has to offer. It is a lovely sensation to be pushed back into the sheepskins by such power. Rotation is lighter than that on most piston twins and results in climb rates at an indicated airspeed of 250 knots, greater than 6,000 feet per minute depending on load and altitude.

A typical climb profile from Cape Town to Lanseria with eight passengers (ISA conditions) will take 11 minutes to FL370 and under 14 minutes to FL410. We would have covered 65 to 85NM respectively in this time. At gross weight (ISA conditions) the Challenger 300 will climb to FL430 in under 27 minutes.

Typically we will cruise the Challenger 300 at M0.80 to M0.81 but we are able to go as fast as M0.83. At the levels we fly this translates to a TAS of 450 to 480 knots. We can cruise for six hours or more at these speeds, allowing us to fly the 2,800 to 3,100NM advertised. The noise level in the Challenger’s cabin is lower than any I have previously experienced and allows for normal conversation among the passengers. With the Airshow and entertainment systems, telephones and PC power jacks, as well as the Flight Attendant feeding you frequently there is no reason to become bored on board!

The first descent profile I flew, calculated by the FMS, seemed to be very flat and I had the distinct impression that we would be too low too early. The Challenger 300, when flown at flight idle with an indicated airspeed of M0.80/280KIAS, will descend at about 3,500FPM. When the speed is reduced to 250KIAS in the lower levels the rate of descent decreases to about 2,500FPM. Further speed reduction causes the rate of descent to diminish so much so that you get to a point where you can either slow down or go down, but not both at the same time. A rule of thumb is to begin the descent at a distance of three times the height to target in NM.

Approach and landing could not be made simpler. Speeds and landing distances are calculated via the FMS again and once the wind, temperature, QNH and weight is punched in to the ‘box’ the speeds are available for posting to the EFIS. Typical Vref speeds will be from 113KIAS to 122KIAS. The aircraft ‘talks’ to you with height information, and due to the approach angle very little flare is required. Touchdown is generally smooth thanks to the large tyres and trailing link undercarriage. Braking action is excellent and almost not required at all if full reverse thrust is selected.

A typical Challenger 300 will cost approximately $20 million, with used machines selling for $12 million upwards. Due to the demand for the Challenger 300 some late model aircraft have asking prices in excess of the new aircraft list price.

Deity of the Sky